HSBC, McDonald’s and PARKnSHOP top the list of most authentic brands in Hong Kong, according to communications agency Cohn and Wolfe’s Authentic Brands 2014 report.

Although McDonald’s takes up the second spot among the most authentic brands for Hongkongers, the survey also shows that only 18% of respondents believe the fast food sector is good at displaying authentic behaviours.

The global top three authentic brands were McDonald’s, Samsung and Apple. For respondents around the world, a top concern that was most likely to spur anger in respondents was lying about the food that you served them.

Geoff Beattie, global head of corporate affairs at Cohn & Wolf, who headed the study, said respondents were not simply choosing brands they knew but rather based on their personal experiences of the brands.

“Majority of people may see a brand as authentic based on the simple value exchanges they have with the brand day in and day out, for example, when they go to a supermarket or a burger chain, they get the product they want,” Beattie said.

“Apart from proximity, authenticity is also about delivering the brand promise.”

For example, in Germany, low-cost grocery stores top the list of authentic brands.

The lack of trust in the fast food sector by respondents however, reflects the fact that brands need to use a range of spokespeople to speak to consumers in order to be believed – key opinion leaders such as mommy bloggers for supermarkets, said Beattie. 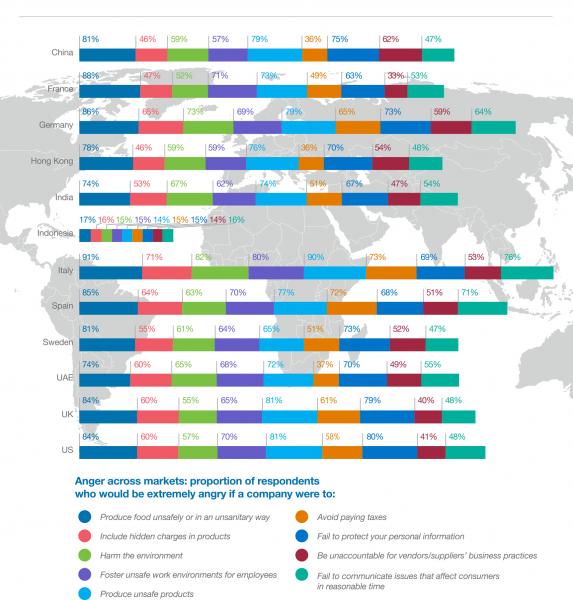 Is authenticity just an empty branding concept or does it really bring in the cash?

Globally, 63% of the survey respondents said they would buy products from an authentic brand over its competitors, a sentiment echoed by 66% of Hong Kong respondents.

“This is a very significant figure because it means a lot of people will change their behaviour with respect to brand authenticity,” Geoff Beattie, global head of corporate affairs at Cohn & Wolfe, said.

“Authenticity is the foundation that brands need to get right before they can build on top of that the value that comes from innovation and product design.  People are looking for a more adult and respectful relationship with brands.”

Meanwhile, banking was the sector that was seen to be the most authentic in Hong Kong for 55% of local respondents, much higher than 43% of respondents globally.

“Banks are featured more in HK and China in terms of brand authenticity than in the West.  People are more willing to trust banks because Hong Kong did not have the same experience during the financial crisis in the West where people felt lied to by banks,” Beattie said.

Brand authenticity even mattered more than innovation and product design.

87% of global respondents said bring integrity was important at all times, while only 72% said the same for innovation, as factors affecting people’s purchasing decisions.

Among the top two concerns most likely to spur anger among consumers, concerns surrounding data security grew this year.

Among mainland Chinese respondents for example, 75% are concerned about data security this year compared to 63% in 2013.

Beattie attributes this to the way data is often gathered from social media and used to market goods to Internet users.

“Fast-growing markets valued authenticity more than slow-growing economies.  It’s not just about price and value for money as you might assume of some emerging markets.  Many consumers in these markets want the foundation of authenticity product quality and innovation.”